In an apocalyptic near future LA, “Nurse” runs an expensive hotel hospital only for its criminal members. Jody Foster is great as the weird “Nurse” and the first part of the film the film has a bit of that Jeunet-like weirdness.

Naturally a few people that are better not in the same building need to find admission in Hotel Artemis, so things can only go wrong.

Especially the first half of the film is very entertaining. Nice humour, funny dialogues, strange findings. “Nurse” suffers a trauma that is mostly worked out in the second half which makes the second half less funny. The film explains all events in the end.

Dupieux again made a pretty absurd film in which he put a lot that does not fit. Reactions to situations that are ‘off’, the situations themselves are odd, weird dialogues and then a totally strange (yet interesting) interweaving of story lines.

The atmosphere is a bit like that of “Wrong” (2012). Suppressed absurd humour. There are some completely weird scenes, but when the film seems to get some sort of idea rather than being just “a collection of absurd scenes” as I described “Wrong”, it raises a little above that previous film.

Not great, but somewhat amusing.

Once Upon A Time… In Hollywood – Quentin Tarantino (2019)

Hollywood 1969, a year of heights and lows. Tarantino shows how he would have preferred this year to go.

The main character is Rick Dalton, played by Leonardo DiCaprio. Dalton is a Western actor who has just past the top of his career. The actual hero of the film is Dalton’s stunt double, Cliff Booth, a part in which Brad Pitt gets to be the cool guy.

Dalton recently got new neighbours, the young and upcoming director Roman Polanski and his beautiful wife Sharon Tate. Tate also gets quite a bit of the story.

Then there is this group of hippies who live in a commune a bit outside Hollywood.

We mostly follow Dalton’s career, his films and his uncertainties. This gave Tarantino the opportunity to film Western and war movies to mix in the film. This is usually in the over-the-top Tarantino style and very amusing.

The story contains quite some drama, but also Tarantino-style dialogues and of course humour and violence. There is a range of famous actors in smaller parts too, Al Pacino, Kurt Russell, Mike Madson, just to name a few. He also again takes 160 minutes to tell his story.

Not great, but a fun watch.

The director of “Rubber” comes with another weird film. “Wrong” is a bit of a collection of absurd scenes, not unlike some Scandinavian films. After a while some sort of ‘story’ starts to unfold.

Dolph’s dog is gone and he later finds out that it has been kidnapped by some guru who says that people love their pets more when they have been gone for a while.

Dupieux presents a range of oddities that are sometimes amusing, sometimes less so. Overall the film is ‘just fine’ at best.

Is it a coincidence that a film of the director of the recently released “Lords Of Chaos” popped up on my watchlist? I actually do not remember.

Both “Lords Of Chaos” and “Spun” are about derailed youth. The former film could be closer to the director’s own youth, being a former member of the ‘first wave black metal’ band Bathory.

In “Spun” one of the characters is watching a black metal video in one scene, an amusing reference to the film of almost two decades later. Åkerlund has more amusing future references. A wonderful Mickey Rourke is playing “the cook” and he is constantly watching show wrestling. The cooks girlfriend is played by Brittany Murphey. The two will later join the silver screen again in “Sin City“.

“Spun” is a highly amusing film about drug-abusing youth. As soon as they snort something up, there are some very fast shots and Åkerlund added weird and sometimes psychedelic cartoon elements to his already ‘overdrive’ montage.

“Spun” contains a lot of drugs, sex, bad language, weird scenes, grim humor and is certainly a fun watch and like his latest, the film is based on “truth and lies”.

December 1988. I just turned 13 as the oldest of four and my mother thought it was a good idea to take the entire family to the movies. I believe it was Sinterklaas night (the Dutch gift-giving holiday early December). There were many more people than expected and the early showing was already fully booked, so we took the late one. “Who Framed Roger Rabbit”, a unique film in which film and animation were combined.

I do not really know if I ever saw the film a second time, but my guess is I did, because I suppose it has been shown on TV numerous times. On film fora the title often pops up when yet another person asks for “neo-noir” films and a while ago my girlfriend mentioned she would like to see the film again. Heck, why not? I remember it being funny.

Well, it is. It is quite amazing that the combination of cartoon and film still works well most of the time. Also there is an amazing amount of references to Disney cartoons, almost as if every possible character had to have a part in the film.

Roger Rabbit is married to sexy cartoon woman and framed for murdering his boss, but the toon-hating private detective Eddie Valiant sets out to help him of course running from one weird cartoon situation into the next.

Directed by Gondry, written by Charlie Kaufman and starring Patricia Arquette. Would that be reason enough to watch a comedy? I am not entirely sure.

The story is of course pretty absurd and has some elements critical to modern society. Arquette runs around in an Eve’s costume half of the film too. The film is too light for my liking though.

Arquette plays a hairy girl who decides to retreat into nature, but later returns to society. Her husband is the ultimate example of man trying to ‘enlighten’ nature: he tries to teach table manners to mice. When the two run into a wild man, Nathan (the husband) sets out to socialize “Puff” by teaching him how to behave at a classical concert and other things that apparently makes men civilized.

“Human Nature” has some nice, subtle humor (and some of the more absurd kind) and a message, but I cannot see much more in it than very light entertainment.

Renton moved to Amsterdam with the money he stole from his buddies at the end of the first film. Begbie spent all these years in jail and Spud and Sick Boy just stayed where they always lived. Then Renton returns to Edinburgh. His old buddies are, of course, not happy with him leaving with their money. The betrayal has not worn. Especially’s Begbie’s hatred has only grown with 20 years in jail and he was not an easy person to begin with.

This is used as an umbrella for a film that sometimes reminds of the first film (especially in the beginning), but there is more drama than I remember of 20 years ago. There is some of the gory humor again, but much less drug infused crazyness.

The acting is good, the story less so (a couple of odd mistakes), but overall “T2” is highly entertaining, especially for people who know the first film, since there are many references, flashbacks and inside jokes that will remain unclear to people whose first Trainspotting this is.

No need to see it on the big screen though, but when you like the first film, “T2” will probably not disappoint you.

Johnny Depp returns to Alice’s wonderland. This film is an obvious sequel to Tim Burton’s “Alice In Wonderland” from 2010. The actors are largely the same as are the way things look. Story-wise Bobin’s film is a bit of a prequel explaining the youth of the hatter and the reason for the Red Queen’s head-size.

“Alice Through The Looking Glass” is amusing, but never reaches the level of Burton’s film. It has the usual Disney mix of children’s and adult’s humor, adventure and weird characters (such as Sacha -Borat- Cohen as Time).

An amusing watch, but not a must-see. 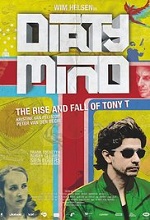