Towards the end of his life, Eliade (1907-1986) decided to slightly rewrite and bundle a few essays that were initially intended to grow into larger works but never did and texts with not the most common subjects. From the description I understood that this work would be more on contemporary subjects which would be very interesting.
Indeed the book touches more upon Western subjects than most of Eliade’s works and there are references to relatively recent times, but it is not like this work is all about witchcraft and occultism in our present time. Yet, the first essays begins with the question: “what does a historian of religions have to say about his contemporary milieu?”; this essay investigates occultic influences in contemporary society (but not religious groups). It makes a nice read.
The second essays opens with a temporary anecdote, but continues to speak of the connection between building and the cosmos; this makes a ‘real Eliade’ piece with references to small tribes and history.
The following article is about mythologies and rites around death and then follows an interesting investigation of the rise of occultism in the late 19th century touching on Eliphas Levi, the Theosophical and similar societies and René Guénon. This is surely the most interesting essay of this collection.
Next up are “Some observations of European Witchcraft”. The author investigates why witchcraft would have been so popular during the time of the witch-craze, but also who actually ‘invented’ witchcraft.
The last essay is about sex-rites in different times and cultures.
Unfortunately this book is only 158 with a large part reserved for the bibliography and index. The essays are relatively long, but some where out before I knew it. It was nice to read about the ideas of this famous author about subjects that I have experience with myself. The texts somehow seemed more ‘distant’ than some other of Eliade’s works, but however he does not say it directly, Eliade indeed seems to have admired Guénon.
A nice little book to read some time!
1978 University Of Chicago Press, isbn 0226203921

Essential Sacred Writings From Around the World * Mircea Eliade (1967) 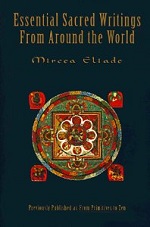 Originally published as “From Primitives To Zen”, Eliade presented an anthology of sacred texts for his students.

The instigation for this anthology of religious texts came during my first years of teaching History of Religions at the University of Chicago. In discussing a specific problem, I expected my students to read at least some of the basic original sources; but I soon discovered that I was unable to recommend to them any single work where one might find a number of essential texts regarding, for example, high gods, cosmogonic myths, conceptions of death and the afterlife, etc.

So he made one himself! Eliade goes from Amerindians to the monotheistic religions, far Eastern, small tribes from around the world and all put in different chapters which deal with certain topics (creation of man, origin and destiny of the soul, patterns of initiation, etc. etc.) Eliade recommends reading this book from cover to cover which makes well over 600 pages to cover. The book is actually a compilation. Eliade collected translations from various scholars (some texts are his own). Not all texts are translations of traditional texts, quite a few are descriptions of some scholar about (for example) the view of some Indian tribe on a certain subject. There are highly interesting, but also fairly dull texts and the same goes for the different subjects, but I understand why Eliade recommended to read the book from cover to cover, since you get different religions on different subjects which gives of course some more insight.
A very nice book, but not a very easy read.
1967 / 1992 HarperOne, isbn 0062503049

I am a bit disappointed by this book by Eliade. The title would have better been “history and meaning in religionswissenschaft“. The field that Eliade operated in he prefered to give the German term religionswissenschaft. This term he usually gives the (not too good) translation “history of religion” or sometimes (somewhat better) “comperative religion”. The book proves to be a history and investigation of the value of this science and only here and there you will get some religionswissenschaftliche information where the writer takes an example. These are the interesting parts of this book, but they are unfortunately few. In general the book is not uninteresting, because you will get an idea of the theories and important players in the field, but I prefer Eliade’s ‘normal books’.
(14/5/07 -2-)
Read quotes of Eliade here.

I bought the Dutch translations of these books from the 1960’ies from one bookshop. The books appear to go together. Maybe I had too high hopes about these two books. I expected to get books with comparisons and explanations of symbols and symbology. In a way both books speak about these subjects, but not entirely the way I hoped. “The Myth…” speaks about archetypes in the Jungian sence and how these archetypes shaped mythology, religion and folklore. Eliade speaks about the repetition and periodicity of time and nature and how this led to anual feasts. Also a part is devoted to fate/karma. Is is an interesting little book, but there is a bit too much written about “primitive” African, South-American and far Eastern tribes while I hoped more Indo-European comparisons of myths and symbolism.
“Images And Symbols” partly covers the same ground as the other book, but is more focused on images and symbols. Again more in the sense of mythology, archetypes, the symbol of the centre (also in the other book), repetative time, etc. Nice is the part about the “god who binds” and the symbols of knots in different cultures. A long part is about shells for fertility and the last part is about water (floods, baptism, etc.). Again a nice book, but not exactly what I hoped for.
(7/1/04)
Read quotes of Eliade here.

My 1975 copy doesn’t have an ISBN code, but since the book is still in print, I used the new cover and ISBN. This is another little book by Eliade, this time exploring the subject of initation. Eliade first speaks about puberty rites and later about “specialized initiations, which certain individuals undergo in order to trancend their human condition and become protégés of Supernatural Beings or even their equals.” (p. 129). As third sort of initiation, Eliade recognises the admittance to secret and/or esoteric groups and the becoming of shamans. As “historian of religion” Eliade gives many examples, comparisons, etc., but these are mostly from indiginous Australian groups. Here and there Eliade speaks of African tribes and even more seldomly about other groups, such as the Celtic and Germanic tribes. However the book is only 170 pages thick, Eliade is quite detailed (even though it is only “a bird’s eye view”) and informative. It is nice to hear of similar structures and symbols of initiations all over the world. I would have liked more focus on Northern European tribes, but you can’t have everything. Not as interesting as the other Eliade booklets that I reviewed earlier, but this writer remains one of my (current) favorites. Noticable are the first lines of the epilogue: “As we saw, modern man no longer has any initiations of the traditional type. Certain initiatory themes survive in Christianity, but the various Christian denominations no longer regard them as possessing the values of initiation.” (p. 132) But also here: “The only secret movement that exhibits a certain ideological consistency that already has a history, and that enjoys social and political prestige is Freemasonry. The other self-styled initiatory organizations are for the most part recent and hybrid improvisations.” (p. 133)
1975 Harper, isbn 0882143581 (26/7/06 -3-)
Read quotes of Eliade here.

The HarperCollins Concise Guide to World Religion: The A-to-Z Encyclopedia of All the Major Religious Traditions

I found a nicely priced second hand version of the Dutch translation of Dictionnaire Des Religions book (1990) which became Wereldreligies In Kaart Gebracht. I believe it is the first book of the Romenian scholar Mircea Eliade (1907-1986) that I read. It is -so to say- a summery of the massive result of Eliades lifelong investigation of all the worlds religions. A book of not even 400 pages speaking of (almost?) every religion that you can think of, old or new, big or small. African religions to gnostic religions, mystery-religions, Eastern religions, name it, and this duo has a chapter or at least a paragraph about it. The book is divided in 33 groups which are each split up in paragraphs. There is a massive index referring to the paragraphs. Everything is -as Eliade wanted- put to readable (Eliade wanted something for the general public) that it really became “a novel of the worlds religions” as the preface puts it. So just try to lay your hands on this standard-work as well.
(7/1/04)
Read quotes of Eliade here.

Another Eliade that I found second hand. This little book speaks about the religiosity of mankind. He compares known and less-known traditions and religious expressions, symbolism and mythology. Fairly interesting, especially on a few parts where he comes with new information (for me). Quite some stress on African religion, but also Germanic mythology and initiation ceremonies in different cultures.
(26/2/04)
Read quotes of Eliade here.