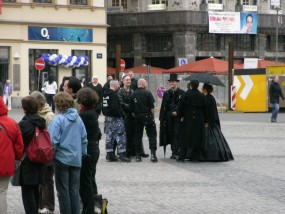 For the third time I have attended the famous Wave Gotik Treffen in Leipzig. The first time was nine years ago. The disastrous year in which the festival went bankrupt halfway. The previous time was two years ago. That was very nice, save for actions of extreme leftwing people attacking the audience of bands they accused of certain ideas. This year no bands had been scheduled to play in the UT Connewitz (the homebase of the demonstrators) and I have heard of no problems this year.
It is funny what people think is “gothic”. In the Netherlands, most people have not heard about it, but nowadays some will link it to bands such as Within Temptation. In Germany people are more accustomed with the phenomenon which they even manage to distinguish from metal (which gets harder since the WGT schedules more metal with every edition). People listening to some subgenre of “gothic” will say they “are not gothic”, but personally I find the WGT a nice overview over an enormous scene and this is why a great many different people, musical subcurrents (with the accompanying clothing styles), etc. travel to Leipzig each year to go to the WGT. This year there was no ‘real industrial’ or noise, but the organisation did not shy to schedule some neofolk. 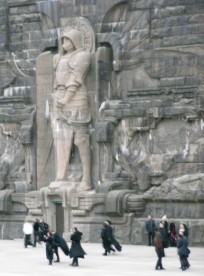 Recent editions have attracted 15 to 20.000 visitors! This year there were almost 200 bands and on 37 locations you can watch bands, see films, listen to lectures, shop at markets, have a drink, etc., etc. The program of the four days is so stuffed and the locations so far apart, that I often find myself winding up at places that I would normally go to too… But, me and my girlfriend had a very varried program as you will see below. What I personally like about the WGT (and I think a lot of people with me), is the complete take-over of the city of Leipzig. There are things to do downtown and in each corner of the city and at any time of the day, so whether day or night and even at places where is nothing to do, you will see strange people wearing black (mostly), since many people travel around. What struck me, by the way, is that the larger part of the audience ages with me. There seems to be a minor accretion from lower ages. What I also never saw before is that apparently Leipzig locals and tourists alike find it a day well-spent to hang around the entrance of a big “gruftie” attracting place (for example the entrance of the Agra park, or simply downtown) and make photos of the most extravagant figures around, who, on their turn, vastly enjoy the attention. 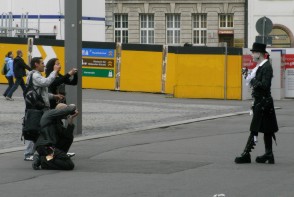 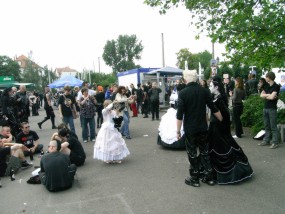 Friday
So what about our schedule? On friday morning we took the car and drove to Leipzig. We arrived around dinner time, checked in to our hotel and went to the Kohlrabicirkus to get our ‘bracelets’. Initially the ribbons were all gone, but after some waiting we got ours and speedily went to the Kuppelhalle of the Volkspalast, since the most interesting bands of the festival were to play there. We missed the first band “Jänerwein”, but were right in time for Of The Wand And The Moon who gave away a nice show in the stuffed and beautiful room. I guess that there were 600 to 700 people there, which is an awfull lot when you know these performances from the Netherlands.

Next up was Rome. Also a very nice show, but he did only the more melancholic songs (including a few new ones). Rome seems to enjoy a growing audience with more variety than just the neofolk people.

I was mostly curious about Fire + Ice, since I had never seen that band before and Ian Read does not seem too keen on ‘the scene’. Well, the audience adored him, justly, since the performance was beautiful with a singer moved by his own songs. He had some messages for us too.

After this show, the day had been long enough for us. The DJs at the Kantine did not start with interesting enough music to prevent us from going back to the hotel.

Saturday
So, what do you do when the hotel serves breakfast until 11.00? See what the day-parts of the program are! The Heidnische Dorf (Pagan Village) opens at 11.00. This village has a Medieval market and two small stages on which the band Ragnaroek plays every few hours (alternated with other bands). 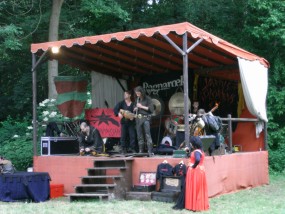 We were lucky that we got a wrong ribbon, one that gives entrance to the camp-site, since now we could just walk from Agra over the camp-site to the Heidnische Dorf which saves a lot of walking. The Agra park itself opens around noon with a massive market with all kinds of ‘gothic goodies’, from home decoration to t-shirts and cds and of course clothing, jewlery, etc. Early in the evening another set of neofolk(-related) bands were playing in the Anker. When we came in Die Weisse Rose just entered the stage. 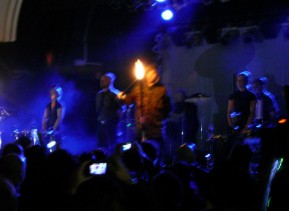 This awfull band made us leave the venue and because the hotel was not as nearby as we thought, we missed the next band Neutral. When we came back in, we were right on time for Ostara. 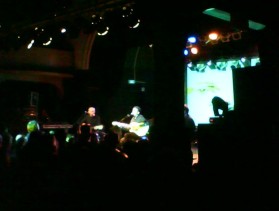 The band got back to their neofolk roots and presented old and new neofolk material. Nice, but to me Ostara is not what it used to be.
About the next band I did not really know what to think. I do not have much material of 6Com and as far as I know, the material he released is varried. However the militaristic start of the show was not that bad, we left early again. The Anker is another nice location which also handles several hundred visitors. 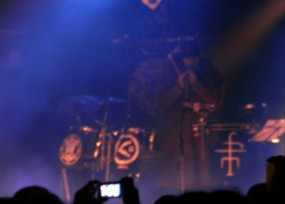 We went back to the Agra place and waiting for the 1.30 (yes, that is AM) Current 93 show, we walked to the Heidnische Dorf were we ran into Solblot who on their turn were supported by Kim Larsson of Of The Wand And The Moon. Quite typical neofolk, but not bad.

After returning to the Agra halls and some waiting there, we entered the gigantic hall in which Current 93 was about to play. A wonderfull variety of people, enough to give a crowded idea, but plenty of room in the corners of the hall. David Tibet brought an entire band and gave a rather ‘rocky’ show. Pretty nice, but the hour of the day made us decide to not watch the show until the end. 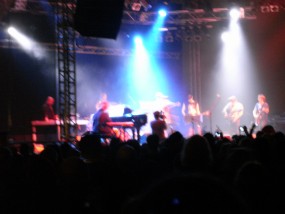 Sunday
Sunday had a bit of a strange schedule for us. There were no bands that I really had to see, but some interesting names nonetheless. Each in a different venue of course. In the late afternoon we watched a bit of Oswald Henke’s (of Goethes Erben) new project Fetisch:Mensch in the same gigantic Agra hall. 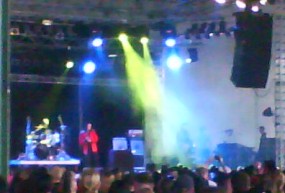 A gothic rock kind of thing. Not my kind of music, but with the enigmatic Henke as frontman, nice to see.
Next up was something completely different: the requiem of Mozart performed in the crypt of the Völkerschlachdenkmal, an impressive location and this year the only thing in or around the Denkmal. A stunning amount of people came to see this classical performance. Hundreds of people were gathered on floor-level and hanging over the ‘balcony’ above. A real orchestra with a real choir took place in the middle and gave a magnificent performance for an audience that had difficulties understanding the ways of a classical music show. 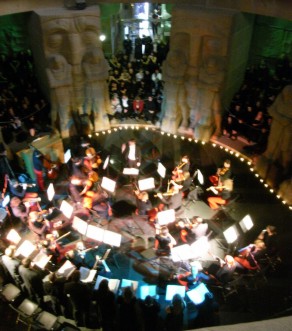 This certainly was one of the highlights of the festival and also a reason why I like this festival so much: a thing like this can only happen in Leipzig. The organisation and the audience have gained enough goodwill of the inhabitents of the city and its groups and organisations that a thing like this can be arranged.
Something quite different was a show by Qntal in the Heidnische Dorf.

Qntal would also play in the Schauspielhaus (theatre) on Monday, but we had a double program there, so… It was way too crowded in the Heidnische Dorf and the music was not too good either, so we split. There was something again very different that I wanted to see later that night: Winterkälte! 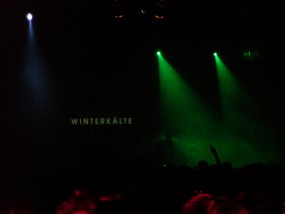 The massive industrial hall called Werk II, was stuffed with people and Winterkälte gave an extremely harsch and energetic show. Nine years ago I saw Winterkälte in what is now the Kantine of the Volkspalast (before the whole complex was restaurated) and this year they blew me away again with their danceble but extreme industrial music. Again great to see people who judging by their appearance should listen to other music, dancing their asses off on Winterkälte. Yep, inspite of a look that could be connected to a certain kind of ‘gothic music’, most people fortunately have a wider musical taste.

Monday
Damn, a difficult schedule this day. A couple of interesting bands were to play in the Schauspielhaus and at the same time a few Loki bands in the Volkspalast. Choices, choices…
Downtown we ran into yet another Medieval market on what is called the Moritzbastei. Even around noon there were a handfull of people there and a band playing: 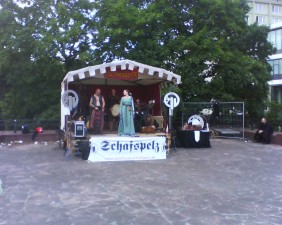 After that we saw a fictitous Vampire documentary called “Kevin” in the local cinema. Hundreds of “grufties” waiting to get in together with children wanting to see some childrens film. Nicely humorous. After that we went to the Schauspielhaus.

When we came in we were right in time for a band I did not know yet: Ianva. They have some Italian sound that I would not really call neofolk. A trumpet, drums (great drummer), several guitars, a male singer and a female singer for the more cabaretesk songs. I would not buy their albums, but I enjoyed the show. 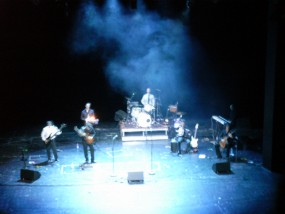 After this band it was supposed to be the turn for Camerata Mediolanense, a band that apparently arose from the grave. My idea was to watch half the show and then speed to the Volkspalast for the second half of the show of Herbst9, but after an hour of waiting, we left the Schauspielhaus and fortunately were in time to see a bit of Herbst9. I have no idea if Camerata played or not. 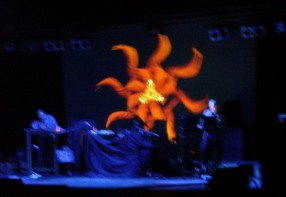 The last performance of this years WGT was Troum. Not really my kind of dark ambient, but nice to see these veterans at work. 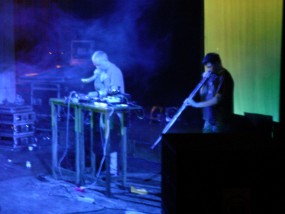 On tuesday morning there were still some “Schwarze Leute” at breakfast, while others apparently left and we continued our holidays elsewhere.

And yes, the photos are small and often out of focus. I still have not found the trick to make good concert photos with my camera, but you get the idea.