In 2009 or 2010 I was contacted by a man who wanted to revive the Antaios journal that was edited by Mircea Eliade and Ernst Jünger. There were plans to start with a website, but to eventually come to a printed magazine. The website could be found at new-antaios.net. The magazine had a flying start, but was short-lived.

I was asked to write a short biography of Franz Farwerck. It could be found on the website, was copied by another website called Euro Synergies and when it became clear that The New Antaios would fold, I republished it on this very website.

In order to better be able to present the information that I gather, I made a separate website which you can find at Farwerck.nl. Last updated 19 June 2019 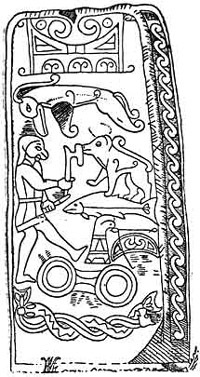 Is it because the next holiday will be Scotland or some other reason, but I recently find myself fascinated by the so-called “Pictish stones”. The first time I saw the strange Pictisch symbols was about a decade ago in the fascinating book “Noord-Europese Mysterieën En Hun Sporen Tot Heden” (‘North-European mysteries and their traces to the precent’) (1970) by the Dutch author Frans Eduard Farwerck (1889-1969). He displays several stones, but the Golspie stone is the most fascinating. It not only contains (virtually) every Pictish symbol that we know, but also supports Farwerck’s theory about the symbolism. A theory that I have not found on the world wide web yet, so I figured my scribblings might add something to the information about the Pictish stones that is already available on the web, which is not little to begin with.

A little bit of history
When the meanings of the symbols are disputed, even the history of the Picts is! It looks like the Picts were the original inhabitants of Scotland. They must have been around in the first or at least second century CE, because when the Romans invaded the British isle in the third century, the Picts were already a force to take into account. They were not such a large society, but this came later. From about 600 to 800 some people speak about a “Pictish nation”. After that the Picts were troubled by the Viking invasions and overrun (or perhaps they just merged with) the neighbouring Gaelic tribes. After 800 there seem to have been no more Picts.Read More »Pictish symbols

This text was written for The New Antaios online journal in 2010 or so. The website has been taken down since, so I decided to publish it here for ‘archival reasons’.
Go here for much more information about Farwerck.

Some 8 years ago I met my girl­friend. We were both involved in a short-lived Dutch ‘spir­i­tual mag­a­zine’ that liked to treat con­tro­ver­sial sub­jects. Through the edi­tor of the mag­a­zine my girl­friend got acquinted with a Flem­ish ‘Asatru’ group and later so did I. At the time my inter­est still mainly laid at Renais­sance eso­teri­cism, Medieval magic, etc. This was already a bit closer to home, since before I had an inter­est in more exotic, East­ern sub­jects. In any case, meet­ing Asatru excelled my shift towards even more domes­tic inter­ests, the old reli­gion of North­ern Europe. While becom­ing active in the group I ini­tially sticked to my inter­ests, but I heard a lot of inter­est­ing new paths.Read More »from “The New Antaios” : Frans Eduard Farwerck

Kinship, gift-exchange, honour and feud in Medieval Frisia and Iceland

In this article I want to say a thing or two about a few interrelated ‘processes’ in the Medieval Germanic society. How groups form and how they are maintained and how ‘mechanisms’ such as honour and feud work. These at first sight varied subjects will prove to be interwoven.
For this article I have used a few books that you will find listed at the bottom. All authors more or less treat parts of the whole, but from different perspectives and speaking about different societies. It seems as if all of these kinds of works owe a great deal to Willam Miller’s Bloodtaking and Peacemaking which is one of the books that I used. Miller is mostly concerned with Medieval Iceland. Another author I consulted is Jos Bazelmans who dived deeply into the Beowulf story and therefor Anglo-Saxon culture. Another Dutch author, Arnoud-Jan Bijsterveld wrote a book about gift-giving mostly concerning people and the Church in the late-medieval Netherlands, a period in which little empires started to arise and this lord-civilian bond is also very present in Bijsterveld’s book. Further I used two articles and last but not least, the inspiration to start this little investigation came from Han Nijdam’s excellent Lichaam, Eer en Recht which is about Medieval Frisian society, with many references to Medieval Iceland.Read More »Kinship, gift-exchange, honour and feud in Medieval Frisia and Iceland

The Renaissance in national context

by Roy Porter and Mikulás Teich (editors) (1992 cambridge university press * isbn 0521361818) Cambridge like the Dutch publisher Brill is one of these publishers publishing books by and for scholars. The books are usually extremely expensive, hard to get and only available via your library. Yet, sometimes interesting investigations come forth from the world of universities and it is worthwhile to try and locate such books (not too hard if you know your ways) and read them. Instead of just reviewing this book, I decided that there is information in it that deserves to be written about at length, so the review became an article. As the title suggests, the book is about the Renaissance in different countries, not about the Renaissance as a whole. This interests me, because I am still looking for information about what happened during the Renaissance in Northern Europe. The book consists of essays… Read More »The Renaissance in national context

The origins of old Germanic studies in the Low Countries

Cornelis Dekker (1961-) has something with Latinised names, just like during the period he wrote about. He writes about Dutchmen, but almost every single one of them is named with a Latin name so even a fellow Dutchman like myself sometimes has to think who Dekker writes about. But this is of course not what I am writing aout. Dekker made a superb study of the study of Germanic languages during the Renaissance, a subject that highly interests me. When I was writing my article about the Northern Renaissance I have been looking for a book like this, but it came too late. Well… never too late! It is almost incredible how much information Dekker compiled about people interested in native history and especially native and old languages. There is so enormously much information in this book that I decided not to rewrite my Northern Renaissance article, but just make… Read More »The origins of old Germanic studies in the Low Countries

A history of Freemasonry