On my article about Irminsuls I get comments which are mostly questions about the Externsteine. Since it would be silly to put the information and images in the comments under that article, I decided to make a separate piece about the Externsteine. Nothing in depth, but with a few images that you might not have seen yet. Most images are from a book that I also reviewed, so I probably make copyright violations. Risking that, here some images and short information. I have visited the Externsteine several years ago, probably before I had a digital camera, so nothing here is mine.

In the article that I mentioned I wrote a few things about the Externsteine. Please go there for the starting information.

The Externsteine are strange natural rockformations which were obviously regarded sacred by the ancient inhabitents of the area. There are several very interesting elements to them. 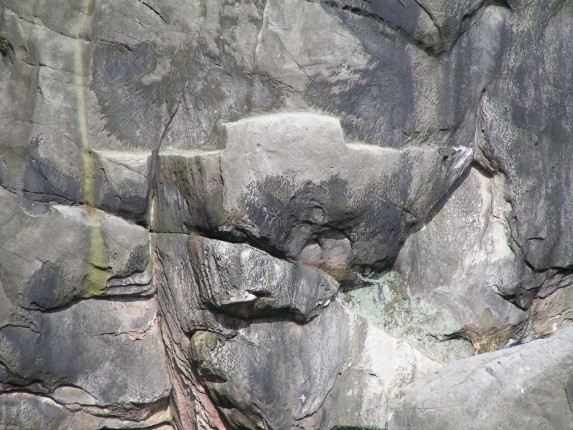 Apparently a natural form in the rocks in which people see (or have seen?) a ship. I don’t have further information about it. 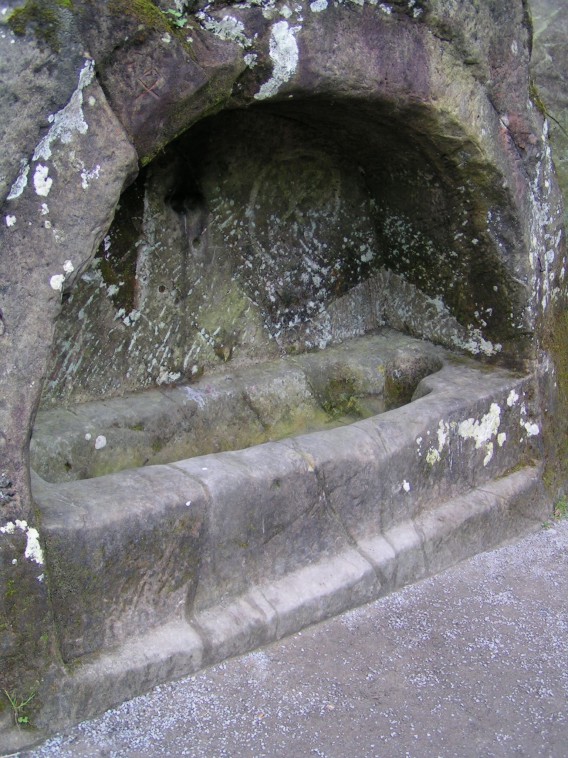 On the ground you can see this grave with noone in it. Too small for a person of today too. Note the Odal rune on the left top of the photo. If you take the Externsteine to be a mystery place, this is the ideal place for the symbolic death part of the rituals. 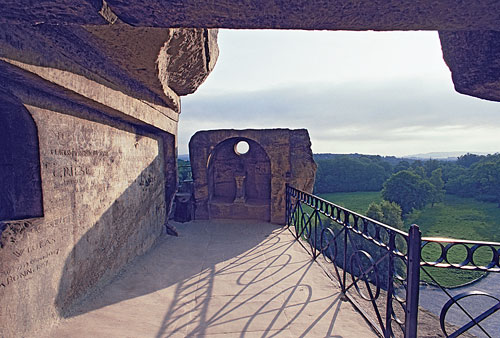 This is the temple or altar on top of one of the stones. At midsummer the sun shines through the hole when it rises. Just like Stonehenge and other ancient sites, this is specifically built for midsummer celebrations. 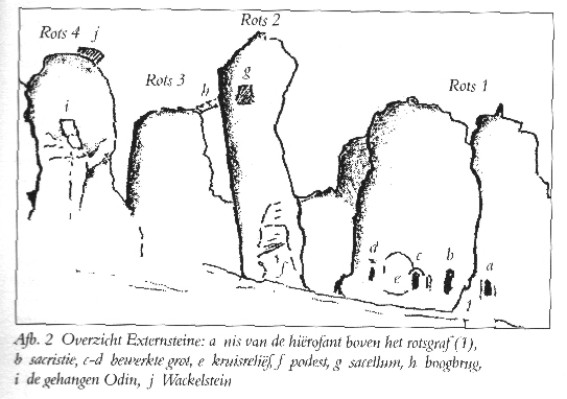 The previous photos are taken from the internet, now I’m going to steal from the book that I mentioned in the beginning. The writer gives a drawing of the stones on which is marked what can be found where. “Rots” is simply “rock” in Dutch. A is the rock-grave, B the “sacristy”, C and D a worked out cave, E the famous carving of the crucifix, F the “podest” (??), E the “sacrellum”, G the bridge between two rocks, I the “hanging Odin” and J the “Wackelstein” (I don’t recall that one). 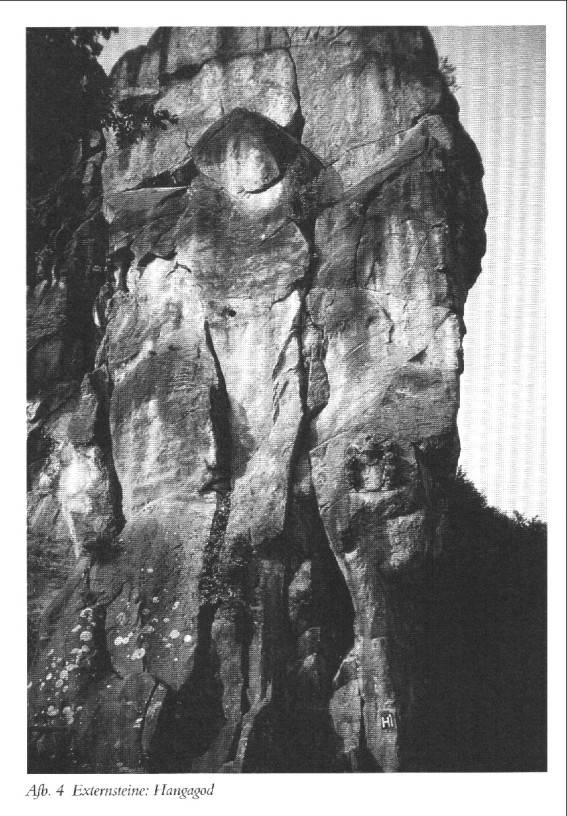 Here we have a figure in which people see a hanged God, Odin (who would have been named Wodan at the place!) for some. I guess it is a natural wearing in which you could see a figure. 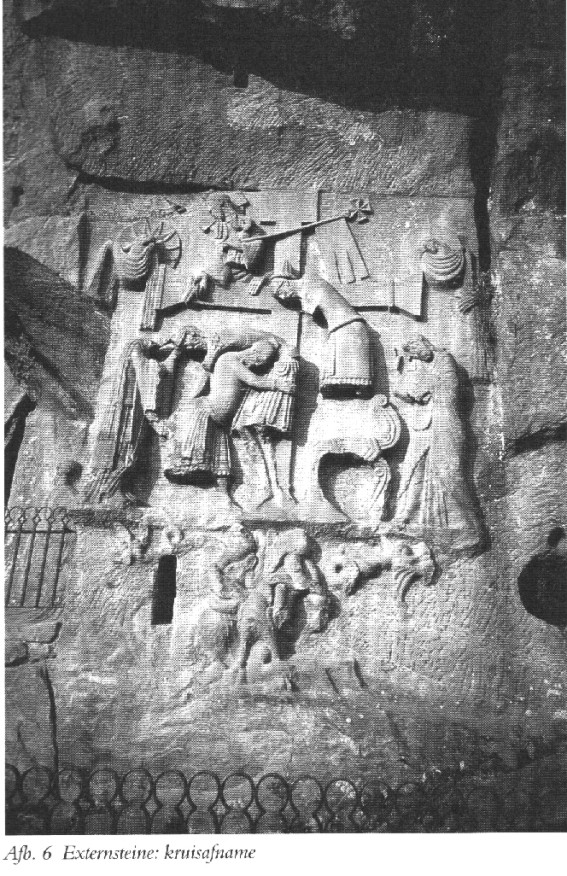 This is of course the most famous part of the Externsteine. It is said that the bottom part is an ancient carving and that the crucifixion scene is carved on top of it to Christianise the heathen sacred place. 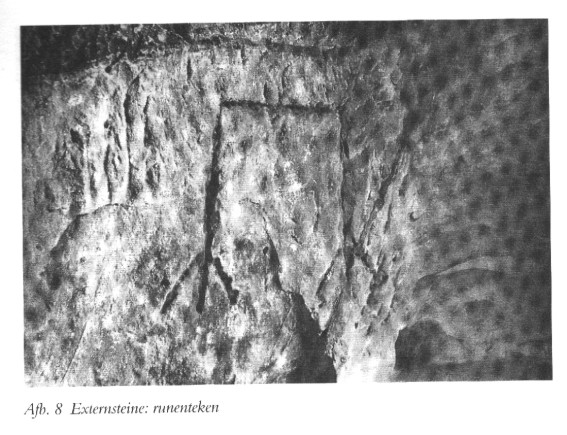 The little known “runic sign” from the inside of the cave that is called the “cathedral”. It looks like an inverted Egyptian Ka-symbol. If it were runes, it would be a combination of two Elhaz/Man runes. Interesting nonetheless! 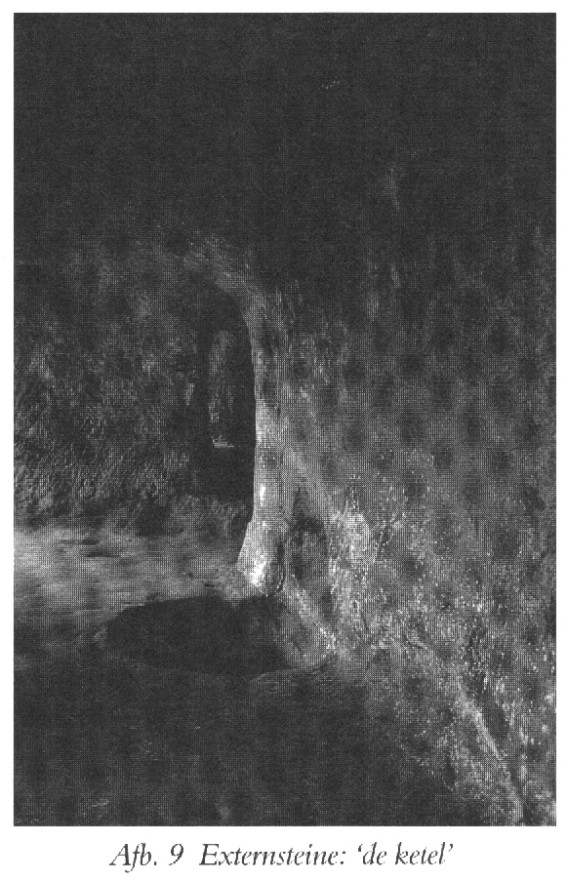 Last but not least, a photo of the inside of the sactuary, where you can see which the writer called “the kettle”. When you visit the Externsteine you cannot go into that part, nor even see the inside through the fences that are placed (because the interesting part is around the corner). This is probably not without reason, but a disappointment if you expected otherwise.

In any case, here are some seldom seen parts of the Externsteine. If you have the change to go there yourself sometimes, I can promise you it is worth the effort! The surroundings justify a longer stay as well with interesting sites.