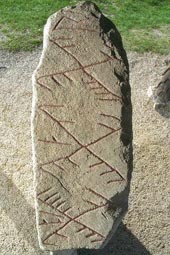 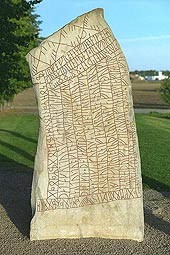 A while ago I was paging through some book (that I cannot find anymore…) and my eye fell on the famous “Rökstenen”, the runestone named after the place where it stands: Rök. On top of the background and on the top of this stone are some very interesting bindrunes. I have seen similar symbols on a variety of places. Would this be coincidental or is there some kind of connection between the different findings? Or whatever their connection, could they possibly tell something about eachother?

Since the Röke runestone is rather famous, there is quite some information about it on the internet, most of which is in Scandinavian languages. The English Wikipedia has a nice text about the stone. It has the texts, transliterations, a possible translation and interpretations. This Wikipedia article concentrates on the parts that come closest to ‘normal texts’ though. More specific information can be found here. It gives you an idea of how such a complex runestone is structured and how people try to interpret what they see. The last website I want to refer to seems to be a Korean one. I cannot read it, but the many images, highlights, etc. sure give a very good idea of the stone. This last website is also the only one that speaks about the more ‘mysterious’ parts of the Rökstenen. Strange symbols that are not runes, but form a numerical system (not unlike the one used in the rune calendars that I describe in another article) in which a number refers to a rune and then a text appears. Also for the cross-figures that my article is about are deciphered in this way. One cross-figure stands for four numerical symbols and then goes to letters (see the Korean article to find out what I mean). Interesting! For some reason the runemaster of the Rökstenen wanted to give ‘plain texts’ and riddles.

Speaking of riddles, the “Icelandic grimoire” the “Galdrabok” also has these symbols accompanying spell 45 “Another way to uncover a thief”. The text does not explain the symbol, it just says that the magician has to carve “the following three staves” and adds some instructions what to do with them. You can see if the ‘Korean system’ is helpfull enough to make something of it that uncovers thieves! 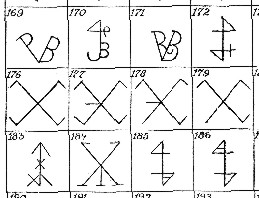 “Huismerken” (“housemarks”) are a rather common phenomenon in the area where I live. Since they are very ‘rune-like’, many people go for the simple connection between them and runes. It is questionable if this connection is really there, but maybe some tradition of bind-runes survived in folklore and was then given through to the housemarks. The subject is very interesting, but not the subject of this article. Some words have to be spend to them though.

In many churches symbols can be found carved in stones that were used to build the church and statues that were used to decorate them. The symbols are called “master signs” and form some kind of autograph of the stonemason that cut the stone or statue. On the other hand, also in many churches, you can find plates or gravestones with quite similar symbols. These however are not master signs, but housemarks, or family signs. Such housemarks come in a great variety of forms, often with ancient, traditional symbols which meanings have been long forgotten. The tradition of housemarks is an interesting, and a difficult one. We know that in many cases, the oldest son got the family sign, the next some got the same sign with a slight alteration (an extra stripe somewhere), girls got their stripes on the other side (left if I am not mistaken), etc. The symbols changed in the course of time, but the family symbols or course had to remain somewhere in a direct line of eldest sons. In most families the symbols are now lost. Some people will try to find them back in old governental papers (ownership papers for example), marriage certificates, etc., because the symbols were often used as ‘autograph’ or noted as family sign. Funny that one of such tradition seems to have come with the kind that is the subject of this short writing.

Not long ago I was reading the little book Allmuter of Herman Wirth and while paging through the images-pages in the end, my eye was immediately caught by the symbol that you see on the right. There is no explanation whatsoever. Wirth only says that it is a “bind sign” carved in bone, found in Altamira, the famous Spanish cave with a lot of carvings. Wirth gives two other images from the same cave, which are both bulls. The text of the book has so vague references to the images that I cannot find if Wirth says anything about these images, so the only thing left is the vague suggestion that the symbol might have something to do with bulls (the rune (if it is one) is not a “fehu” though). Too bad!

I am not going to pose a conclusion or tell that the different, but similar symbols that I have shown you are related. The suggestion goes that around 800 CE runemaster made bindrunes for whatever purpose (cipher?), later they were used in magical spells and who know the tradition was remembered when people started to use symbols for their families? But what does the same symbol do among 20.000 years old wall carvings in Spain?