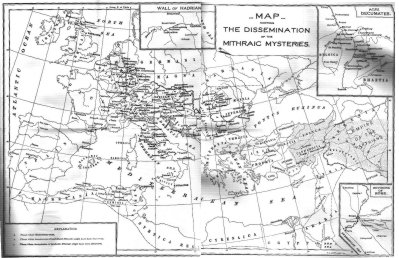 In his Mysteries Of Mithra Cumont has a map from Roman times and notes where Mithraic findings have been done by archeologists and where Mithras-temples (“Mithraeums”) have been found. For years I have wanted to visit one of these temples and some of the marks on the map are even not that far away from where I live. The closest Mitraeum is marked at “Vetera”. It took some investigation to find out that nowadays this is Xanten in Germany not too far from the Dutch border. My girlfriend knew about an archeological park in Xanten where a Roman city is being excavated. Still, nowwhere could I find information about a Mithraeum in this park. Digging up old folders of the time that my girlfriend visited the park as a girl proved that the park is called “Colonia Ulpia Traiana” after the city, but that “Vetera” was an army-camp a few kilometers away. Since Mithraism flourished mostly under soldiers, this would be a more logical place for a Mithraeum, but still nobody could tell me if this temple is still there. We decided to take the change and drive to Xanten to find out ourselves. After seeing the amphitheatre in Birten (near Xanten) a walk to camp Vetera led us to the conclusion that nothing remains of the camp.

So we went to Xanten and its museum and found three Mithraic artifacts, two stones with engravings and a small, damaged statue of a torch-bearer. No Mithraeum has been found near Vetera, but these three things suggest that there may have been one. Quite a disapointing finding which makes me even more unsatisfied about the fact that nowwhere on the internet have I been able to find just a simple list with places where Mithraeums have been found, where they can still be visited and for example where Mithraic artifacts can be seen in museums (I accidentally ran into a ‘tauroctonic Mithras’ in the Brittish Museum in London a few years ago).

All this seems to have been figured out by a Dutch investigator Maarten Vermaseren. He wrote a massive work in two parts (1954 and 1960) called Corpus Inscriptionum et Monumentorum Religiones Mithriacae (CIMRM) which lists and discribes all Mithraic findings known to him.

Writing this article I ran into a very interesting internet article which says: “Vermaseren’s Corpus lists 73 Mithraic temples discovered and published prior to 1945; many of them were simply raided for monuments, in others virtually nothing was found”. And from the same article: “54 new mithraea have been published since the Second World War”. The article names various places where findings have been done, but also they do not refer to relatively complete temples that can be visited. So I decided to pick up CIMRM (in the 1954 printing). This work does -as said- have a list with Mithraeums, but the two volumes have nothing more (and nothing less!) than descriptions of ALL Mithraic findings that were known to Vermaseren. He orders them by part of the world (mostly countries) and bluntly gives the information of mostly artifacts. Often he refers to newspapers or scholarly magazines quoting them in their original language. In the papers of the two volumes a large numbers of Mithraeums are mentioned. I hope I didn’t miss any, but here is the list that I destiled from the many pages of the work. The names which I put bold and in another colour are linked to more information on the internet (excuses in advance when links get broken in the course of time). When there is something to mention about the Mithraeum, I included this in brackets. Not too many Mithraeums are written about on the internet and Vermaseren unfortunately has but a few photos of Mithraeums (but many other photos). I included a few photos of Mithraeums that I haven’t ran into on the internet.

The list of Mithraeums that have been discovered (place (country)): 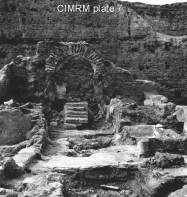 dura europos- Aitador (Syria);
– Fiasha (Syria) (there “may have been a Mithraeum”);
– Dura-Europos (/ Es-Sâlihiyeh) (Syria) found in 1934 (see photo);
– Quasr-ibn-Wardân (Syria) (“doubtfull”);
– Sidon (/ Saida) (Syria) (there “must have been a Mithraeum”);
– Mît-Rahîne (Egypt, near Memphis);
– Rusicade (Algaria, near Philippeville) found in 1845;
– Cirta (/Constantine, Algaria) (there “may have been a Mithraeum”);
– Santa Maria Capua Vetere (/Capua, ancient Roman city in Italy) found in 1922;
in Ostia (Italy) Vermaseren mentions no less than 14 Mithraeums! some of which is less known about noways, but he found reports of the 19th century. one is very interesting, because it has a clear depiction of the symbols of the seven grades of initiation.
then follows Rome, where ten Mithraea have been found or “may have existed”. the most famous are that under the St Clemente church and Santa Prisca church (see photo). others are located in the Palazzo Barberini garden (found 1936), Piazza s. Silvestro (found in 15th century, but now ‘lost’), Capitoline hill (14th century, but destroyed), Teatro dell’Opera (1932 (see photo)) and Caracalla therms (1912).
– Spoletium (/Spoleto, Italy), found in 1878;
– Sentinum (Roman city in Italy) (“there certainly existed a Mithraeum”);
– Angera (Italy);
– Merida (Spain) (only monuments found);
– Camulodunum (Roman city in UK, near Colchester), found in 1929;
– Rudchester (UK);
– Carrowburgh fort (“Procolitia”) (remains were found that were “evidently part of a Mithraeum”) UK;
– Borcovicium (/Housesteads, UK), found in 1922 (close to Carrawburgh, apparently there is nothing to see there nowadays);
– London (Walbrook, UK);
– Vieux-en-val-Romey (France), found in 1869;
– Nuits-Saint-Georges (Les Bolards, France), found in 1932-9;
– Sequana (Roman city in Normandy, France);
– Saarburg (Germany);
– Trier (Germany) (“there was a Mithraeum”);
– Saarbrücken (a “spelaeum”) (Germany) (see my short report of a visit to this mithraeum!);
– Atchana (Alalakh, Turkey), (“sir leonard wooley […] 1953 […] believes to have found a Mithraeum”);
– Carthago (Tunesia) 1899;
– Cosa (/Cossa Volcientium, ancient city in Italy) -photo shows what is also ‘a mithraeum’-,Rome, Santa Prisca 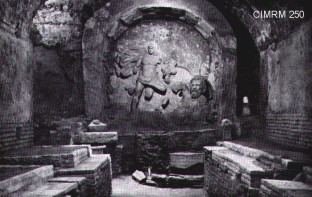 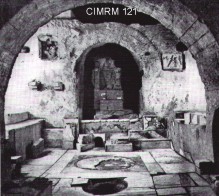 (Apparent) findings that I didn’t find in Vermaseren are the following:
– Hanau (Germany);
– Königsbrun (bis) (Germany);
– Güglingen (Germany);
– Wiesloch (Germany);
– Neuss (“Castra Novaesia”) (Germany);
– Osterburken (Germany);
– Riegel (Germany);
– Tienen (Belgium);
– Deutschwalkenberg (Austria, near Vienna);
– London (under St Paul’s cathedral) (UK);
– Meriada (Spain), is “crypta balbi“?;
– Umbria (Italy);
– Caesarae (Palestine);
– Karlsruhe (Germany).
– Verjuy (Iran). Only logical that in Iran are also Mithraeums, since it was in Iran that Zoroastrianism birthed. Mithras is known mostly under the name “Mehr” and when I ‘google’ for “Mehr temples” I get more hits, but in almost no cases I am sure this concerns a Mithraeum. Click on the place name Verjuy (which is a bit south of Maragheh) and read an interesting article about one Iranian finding.
– Mainz (Germany). When digging in the Ballplatz (a square) apparently a Mithraeum was found in Mainz, Germany. I haven’t found too much information about it, but one interesting article can be found here. 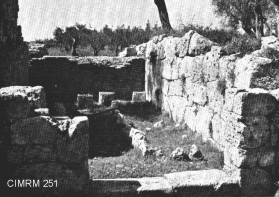 A (not too good) rebuild Mithraeum can be visited in the Bijbels Openlucht Museum near Nijmegen, Netherlands.

Quite a list, I hope the work it costed will make some people happy! Now with this article on Gangleri (7/5/07) you can easily post your additions and/or comments 🙂