HERE BEGINS THE BEGUILING OF GYLFI 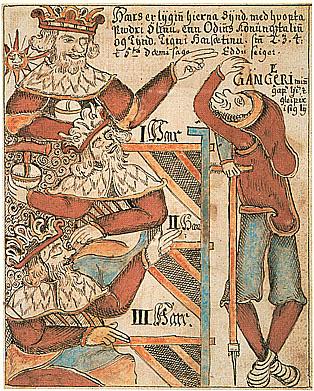 I. King Gylfi ruled the land that men now call Sweden. It is told of him that he gave to a wandering woman, in return for her merry-making, a plow-land in his realm, as much as four oxen might turn up in a day and a night. But this woman was of the kin of the Æsir; she was named Gefjun. She took from the north, out of Jotunheim, four oxen which were the sons of a certain giant and herself, and set them before the plow. And the plow cut so wide and so deep that it loosened up the land; and the oxen drew the land out into the sea and to the westward, and stopped in a certain sound. There Gefjun set the land, and gave it a name, calling it Selund. And from that time on, the spot whence the land had been torn up is water: it is now called the Logr in Sweden; and bays lie in that lake even as the headlands in Selund. Thus says Bragi, the ancient skald:

II. King Gylfi was a wise man and skilled in magic; he was much troubled that the Æsir-people were so cunning that all things went according to their will. He pondered whether this might proceed from their own nature, or whether the divine powers which they worshipped might ordain such things. He set out on his way to Asgard, going secretly, and- clad himself in the likeness of an old man, with which he dissembled. But the Æsir were wiser in this matter, having second sight; and they saw his journeying before ever he came, and prepared against him deceptions of the eye. When he came into the town, he saw there a hall so high that he could not easily make out the top of it: its thatching was laid with golden shields after the fashion of a shingled roof. So also says Thjódólfr of Hvin, that Valhall was thatched with shields:

On their backs they let beam, sore battered with stones,
Odin’s hall-shingles, the shrewd sea-farers.

In the hall-doorway Gylfi saw a man juggling with anlaces, having seven in the air at one time. This man asked of him his name. He called himself Gangleri, and said he had come by the paths of the serpent, and prayed for lodging for the night, asking: “Who owns the hall?” The other replied that it was their king; “and I will attend thee to see him; then shalt thou thyself ask him concerning his name;” and the man wheeled about before him into the hall, and he went after, and straightway the door closed itself on his heels. There he saw a great room and much people, some with games, some drinking; and some had weapons and were fighting. Then he looked about him, and thought unbelievable many things which he saw; and he said:

All the gateways ere one goes out
Should one scan:
For ‘t is uncertain where sit the unfriendly
On the bench before thee.

He saw three high-seats, each above the other, and three men sat thereon, one on each. And he asked what might be the name of those lords. He who had conducted him in answered that the one who sat on the nethermost high-seat was a king, “and his name is Hárr; (1) but the next is named Jafnhárr; (2) and he who is uppermost is called Thridi.” (3) Then Hárr asked the newcomer whether his errand were more than for the meat and drink which were always at his command, as for every one there in the Hall of the High One. He answered that he first desired to learn whether there were any wise man there within. Hárr said, that he should not escape whole from thence unless he were wiser.

On the left/index you can see who Gangleri is, a seeker, like us. In the menu above there are a few options to choose from. You can read a bit more about these pages (intro), or directly jump to one of the sections with articles or reviews.

If you have sometime to say or ask, you can use the comment fields under the messages or Facebook or ask your question (just like Gangleri) to Harr, Jafnhar or Thridi (@Gangleri.nl).